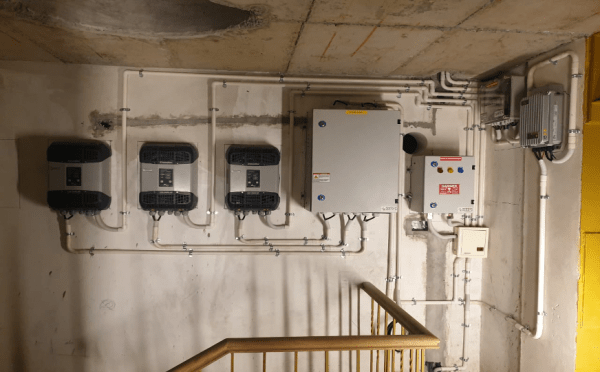 Solar power and storage come together to provide an uninterrupted supply of power, reduce dependence on an unreliable grid.

Solar energy is one of the fastest-growing sectors in India. With solar policies and regulations evolving every year, more homeowners, apartment associations, and business owners are exploring the installation of rooftop solar power systems. Most people are interested in lowering their high electricity bills; while some also go solar to reduce dependency on the utility grid, use cleaner power.

Yet there are some issues with its practical, real-time usage.

In practice, solar power can only be harvested during daylight time. A rooftop solar power system’s performance depends upon several factors, including power cuts. Power cuts are a major influencer for solar efficiency in India. Especially the daytime power cuts which shut down a grid-tied solar power system. This causes fewer units of clean solar energy to be harnessed, delaying the return on investment for the end-user.

One way to overcome the power outage problem is by integrating a solar power system with batteries. The energy generated can be stored in the batteries and utilized during a power outage. Such a set-up continues to reduce your dependency on the utility grid and provides reliable, clean solar power round the clock.

There three ways in which batteries integrate with a solar power system, to make it more reliable for the end-user.

There is no innovation when it comes to this set-up, but a simple jugaad. Simply put, the UPS system is seen as an additional connection point that gets charged by clean solar power during the day. In case of a power outage, the UPS discharges to give you an uninterrupted supply of power.

Yet, if it’s a daytime power outage, the solar power system stops harnessing new solar energy until the power supply is restored on the utility’s side. This is due to the protective action driven by the anti-islanding effect.

Visit this page, to know more about our on-grid projects.

An off-grid solar system is recommended to those who deal with a lot of power outages. The solar energy generated during the daytime is supplied to the connected loads and the rest goes into charging the batteries. This stored energy is utilized by the critical loads at the time of power outages.

• Reduces the dependency on the grid

• Usage of critical loads at the time of power cuts

The Green School is one of the very few schools in Bangalore that run the loads from classroom to playground on solar power; making it completely independent of the grid.

Those who are looking for electricity bill savings and power backup, the hybrid system offers the combined benefits of grid-tied and an off-grid. The solar will run all the loads and charge the batteries during the daytime. The excess solar energy is exported to the utility grid.

During night-time, the batteries can run the critical loads up to 70% of its capacity and the remaining can be utilized for backup, if necessary.

• Least dependency on the utility grid

The solar plant runs all the 5 floors of the building. This includes all loads of the home/studio/workspace except instant geysers. Also, the entire solar plant can be used to run the lift (elevator) as well during emergencies.

A retrofit system is apt for those who already own a UPS system and want to invest in a small-size solar plant. The solar energy from the panels is stored in the UPS’ batteries with the help of the solar retrofit.

Essentially, the retrofit combined with the UPS system works as an off-grid solar plant.

The user wanted to start off with a small solar plant that can run a few lights and a fan during the daytime. As there were an existing UPS and only 2 solar panels were required, a solar retrofit made the most sense. As a result, the user is saving INR 200 (20%) every month on their electricity bills.

So, experiencing reliable power using solar is quite easy. Choosing the right set-up with the help of a solar expert comes a long way in making your investment of money and time, highly useful.