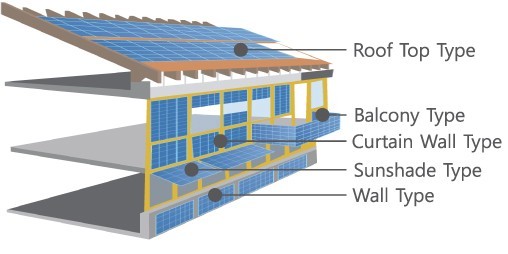 We are running out of space for solar panels on the rooftop. How do we solve this problem? BIPV is the answer.

It is one of the many technologies that help trap the sun’s energy and convert it into usable electricity. BIPVs are integrated into the exterior parts of buildings by replacing conventional construction materials.

Anything progressive brings with it a bunch of assumptions and myths. BIPV suffers the same fate.

BIPV causes water seepage during rainy season?
BIPV can be used only in commercial buildings?
BIPV cannot be integrated into already existing buildings?
BIPV does not generate energy enough for healthy financial returns?

When in doubt, clarify. So let’s address the above-mentioned assumptions and myths.

There is a rapid and excessive increase in the population growth in India. This has been managed through a spike in the conversion of independent houses to commercial buildings and apartments. This means that the space for installing traditional rooftop solar plants, which requires a shadow-free roof area for 25 years, becomes a major constraint. Here is where BIPVs come to the rescue.

Why stick to conventional Brick & Cement?

The onus of sustainable buildings lies with architects. They are the brain and heart of buildings. By creating a sustainable structure, it not only adds value to the building but can also boost its aesthetics. This is because BIPVs are available in a wide range of colours, shades, flexibility, and degrees of transparency. Using of BIPVs in skylights, facade, curtain walls and roofs can make the building energy efficient.

With proper glazing and choosing the right kind of BIPV, it can handle a wide range of physical requirements from being walked on to bending to accommodate complex designs. (Read more: A Guide To BIPV)

While renovating or building a new office space it is important for employers to take into account workplace ergonomics. A poorly designed workplace is uncomfortable and unhealthy. BIPV comes to the rescue, again.

BIPVs provide acoustic and thermal insulation that helps in cutting down the usage of air-conditioners during summer and thermal heaters during winter. BIPV modules also filter out the harmful infrared radiation and allow the entry of natural sunlight. Employees can soak up some Vitamin D. This makes for a healthy and sustainable workplace (Read more: Workplace learning can fix our world’s sustainability problem)

But, is BIPV cost and energy efficient?

While they are two to three timescostlier than traditional solar panels, using BIPVs eliminates cost required for using traditional building materials. This way, the energy needs of the building are planned for during property development orrenovation. A for-profit-organisation has the added advantage of availing tax savings benefits by making availing accelerated depreciation from the government. (Read more: A cryptocurrency backed by the sun)

With technological development, BIPV has efficiencies ranging from 6% to 14% depending on the type of BIPV used and direction installed panels. The electricity generated by the BIPV will ultimately reduce the electricity bills of the building.

The outward and bulky look of the ground-mounted solar panels prevents many homeowners from making the switch to solar energy. With BIPV, one can incorporate solar panels as windows or in-roof systems. This can aid in the replacement of some originals tiles with BIPV modules thereby maintaining the aesthetics of the house. The major advantages of this system are that it’s weatherproof, there is an inlet of natural light, it offsets electricity bills, and functions as a one-way mirror visual cover. (Read more: Net-zero homes are very very real)

The upsides of using BIPV such as natural illumination, efficient energy production, and customisability, certainly lay the foundation of its future in the solar energy market. By integrating into the structure of the building, BIPVs ensure safety against water and wind. In fact, with BIPV it becomes easier to maintain buildings as problems such as seepage and cracks of conventional building materials are eliminated.

BIPV panels can be incorporated into schools, apartments, commercial building and residences. This could be a pillar of India’s energy crisis despite the large space constraint. This future is in the hands of the architects, builders, and consumers.

It is important for the governments and solar energy companies to help them understand the various prospects and advantages of BIPVs. This way, they are enabled to make an informed choice.

While solar energy one of the primary solutions to the global energy crisis, there is something yet to be unanswered.

How can buildings be made realistically energy efficient? Can BIPV be the answer?